What is it, who does it, why do they do it, it is likely none of these questions will be answered with any real accuracy as it means different things to different people. There are a few facts that are easily understood about the Darkside.

There is plenty of anecdotal evidence out there on the internet. There are millions of miles being covered all over the USA by Darksiders, and plenty of claims being made on the advantages, it is not my intention to make any claims, or convince anyone of anything regarding tyre choice. The great thing about freedom of choice is just that, you are free to decide/believe anything you want to.

My experience so far is restricted to a Honda Valkyrie and a Michellin Primacy3 205/60/16 W rated on the rear. I had the tyre fitted and balanced and an initial pressure of 32 psi.  I made changes to the rear fender and removed the caged nuts, replacing them with coach bolts. I cut the rear fender to give the bike a slightly more modern look. 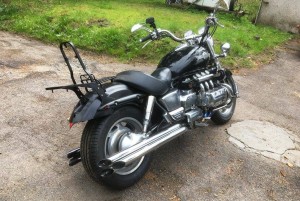 The first few miles were torture, I could not believe how badly the bike felt, trying to climb into the verges on every bend, although fair to say on straight roads it felt planted, more so than a bike tyre. I decided to experiment with tyre pressure and took it down to 26psi, this was a more comfortable option but felt a bit loose on corners, bit of wiggle here and there. So increased to 28 then 30 then 34 and finally 37psi. There it was suddenly it felt so much better. Have stuck at 37psi as my sweet spot.

Riding style changed slightly putting slightly more body weight into bends, a little more concentration, bit like riding an EVO with a 240 on the rear and the primary kicked out an inch. The rest has just been adjustment, understanding and concentration. Having done a few thousand miles in some testing conditions I have made a few observations. The setup is less forgiving than a bike tyre would be, hustling through twisties requires smooth riding and concentration. This is something you naturally adjust to and at the moment the bike feels fine in wet or dry roads. It is a cruiser, it was built for cruising, Although it is one of the better handling cruisers, it does not have the ground clearance to be a hero with knee sliders.

The economics of the choice are clearly understood. A rear Metzeler tyre is about £170 fitted and balanced. This tyre lasts me between 5 and 6k being slightly heavy handed and doing a lot of riding loaded up with camping gear. The Michellin Primacy 3 cost me £90 fitted and balanced. The anecdotal opinions vary on tyre life but 20 to 25k is generally being bandied around. That is £680 worth of Metzeler against  £90 of Michelin, that is a huge saving. 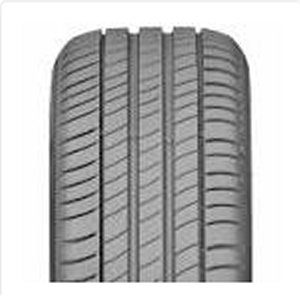 The choice of tyre was dictated by a number of factors. It rains a lot in Scotland so wet weather performance was important. The Michelin had good write ups and reviews. The speed rating is W rated, 168mph which is well outside the bikes top speed. Inside the carcass of the Primacy 3, Michelin have used twin steel belts to better reinforce the integrity of the tyre – aiding in a balanced ride quality and  long life performance.

The tyre had a nice profile , lots of bends in Scotland 🙂

Interesting update the tyre must wear in, as handling has improved as the miles clock up. It is actually getting to the point where i cannot tell the difference. Very stable on long journeys fully loaded with camping gear.

2 Responses to The Darkside